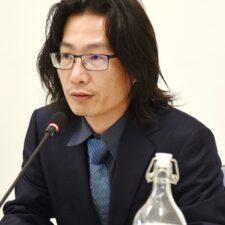 Chien-Huei Wu is currently Research Professor in Institute of European and American Studies, Academia Sinica, Taipei, Taiwan. He coordinated the EU thematic research group in that institute during the period of 2013 to 2015 and now coordinates the US-Taiwan-China trilateral relationship research group. He received his PhD degree in EUI in 2009. Before pursuing his doctoral degree in Florence, he worked for the Ministry of Justice in Taiwan as a district attorney during the period of 2001 to 2005. During this period, had dealt with transnational crimes and international legal assistance requests. He is also qualified as attorney in passing Taiwanese bar examination in 1998.

His research interests cover US-China relations, Taiwan Relations Act, transpacific relations, EU external relations law and international economic law. He follows closely US-China and EU-China relations and US and EU FTA talks. He has published WTO and the Greater China: Economic Integration and Dispute Resolution (Martinus Nijhoff 2012) and Law and Politics on Export Restrictions: WTO and Beyond (Cambridge University Press 2021). He co-edits Multilateralism at Peril: The Uneasy Triangle of the US, China and the EU (Routledge 2022) and Law and Diplomacy in the Management of EU-Asia Economic Disputes (Routledge 2019). He has been visiting fellow/professor to World Trade Institute, University of Bern, University of Cologne, University of Passau and Georgetown University and lectured in various institutions. In 2014, he was awarded Ta-You Wu Memorial Award.

He has advised various governmental agencies in a variety of affairs. In 2011-12, he advised the Ministry in drafting prisoner transfer legislation in Taiwan with a view to facilitating the prisoner transfer between Taiwan and China, and Taiwan and Germany. Since 2009, he has been advising the Ministry of Welfare and Public Health and Ministry of Economic Affairs on trade and health-related trade issues. In 2021, he was commissioned by US State Department through International War and Peace Reporting on the economic and social impact of Taiwan’s and China’s diplomatic competition in third countries. He spoke before the European Parliament on EU-Taiwan trade and investment relations in 2019. He is a regular contributor to The Journalist on US and EU foreign policies and US-China trade war and has been interviewed by BBC, RFI, and VOA, etc. He is now working on a monograph addressing EU-Taiwan-China relations and investment treaty negotiations and leading a team addressing Taiwan’ statehood. He currently participates in a working group on semi-conductor industry and explores the future of global supply chains. He also participates in track-two dialogues organized various institutions, including German Marshall Fund of the United States and the Stimson Centre in Washington D.C.