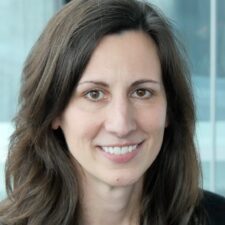 Stephanie Hofmann holds the Joint Chair in International Relations between the Department of Political and Social Science and Robert Schuman Centre of Advanced Studies and is director of the Europe in the World research area at the Robert Schuman Centre. She is currently on leave from the Graduate Institute of International and Development Studies, where she is Professor in International Relations and Political Science. Stephanie holds a PhD in Government from Cornell University (2009).

Most of her research revolves around densely institutionalised spaces (also called regime complexes), variegated institutional expressions of multilateralism, national preference formation on foreign and security policy issues and global ordering processes. In terms of issue areas, she mainly focuses on crisis management and cyberspace but is also interested in the nexus between security and economic policy issues. While she has worked a lot on European and transatlantic institutions, she also has started researching the AU, CSTO, SCO, OAS and the UN. Her work has been published, among others, with Cambridge University Press and journals such as Cooperation and Conflict, European Journal of International Relations, International Affairs, Journal of Common Market Studies, Journal of Conflict Resolution, Journal of European Public Policy, Journal of Strategic Studies, Journal of Peace Research, Perspectives on Politics, and West European Politics.

Stefanie Hofmann is the principal investigator of the Swiss National Science Foundation-funded project ‘To save and to defend: global normative ambiguity and regional order‘ (2017-22). The projects main aims is to disentangle different definitions and practices of the use of force as well as to analyze the UN’s relationship with regional security organisations.

The second research project is entitled ‘Fighting together, moving apart? European common defence and shared security in an age of Brexit and Trump‘ (2018-2022). This Volkwagen Stiftung-funded project supports the research of a consortium of scholars of public opinion, political elite and social identities. They examine the interlinkages between public opinion, media and political elites on European security and defense issues and strive to examine the dynamic relationship between elites and masses in policy-making about common defense in the multi-level European system.

Thirdly, in ‘Navigating institutional complexity: actors and strategies in densely populated global governance spaces‘ (2020-22), she is part of a SNIS-funded research team in which they investigate the interactions of multiple forms of cooperation in institutional complexes using a multi-method research design combining quantitative text analysis, machine learning, statistical analysis, and case studies. The aim is to describe and analyse the global governance landscape, in issue areas such as climate change and cyber policy for the benefit of policy makers and activists, who think about how to engage the myriad of contemporary global governance institutions in a way that best meets their goals.

Hofmann, Stephanie C. 2021. ‘Elastic Relations: Looking to Both Sides of the Atlantic in the 2020 US Presidential Election Year’. Journal of Common Market Studies

Hofmann, Stephanie C. 2021. ‘Beyond Culture and Power: The Role of Party Ideologies in German Foreign and Security Policy’. German Politics 30,1: 51-71.

Eilstrup-Sangiovanni, Mette and Stephanie C. Hofmann. 2020. ‘Of the Contemporary Global Order, Crisis, and Change’. Journal of European Public Policy 27, 7: 1077-1089. Featured in ‘Is the liberal international order in a state of terminal decline?’ LSE EUROPP.

Stephanie’s classes address many questions and approaches on international organizations, international order(ing), and international/European/transatlantic security.  During the 2021-22 academic year, she teaches “Multilateral Cooperation and Institutional Complexity” and “Global Ordering and European Security”.