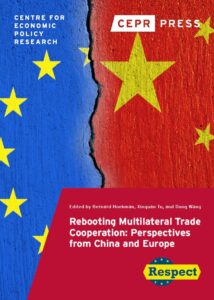 Rising geopolitical and geoeconomic tensions among major trade powers are undermining the rules-based multilateral trade order. China, the EU, and the US – the three WTO members with the largest global trade shares – play a critical role in keeping the WTO fit for purpose in a rapidly changing world economy.  WTO reform is a triangular challenge in the sense that if the three largest trade powers cannot agree, progress is not possible. Tripartite deliberations on address underlying sources of tension and disagreement have been missing. Engagement has instead been bilateral: US–China, EU–China, EU–US.  In this new VoxEU ebook edited by Bernard Hoekman, Tu Xinquan and Wang Dong, teams of mostly Chinese and European experts reflect on key challenges confronting the global trading system and offer pragmatic suggestions for rebooting multilateral cooperation.  A premise of many of the analyses is that the willingness of groups of WTO members to negotiate new agreements on specific subjects is conditional on re-establishing an operational dispute settlement system and on clarifying how to integrate open plurilateral agreements into the WTO. Action on these fronts is important for WTO members to have incentives to pursue plurilateral agreements, and for WTO members that do not wish to engage in plurilaterals to accept that others do so. In parallel, continued efforts to address subjects of long-standing interest to many WTO members, including agriculture and services as well as matters only partially covered by the WTO, such as investment policies, subsidies and state-owned enterprises, are vital to keeping the WTO relevant.  Several authors reflect on the recent China-EU Comprehensive Agreement on Investment (CAI) which includes provisions on subsidies and SOEs and suggests that agreement on such matters between the major trade powers is possible.The ebook is published in the framework of the RESPECT project and can be downloaded from the VoxEU website.